Fire Buffs promote the general welfare of the fire and rescue service and protect its heritage and history. Famous Fire Buffs through the years include Edward VII. 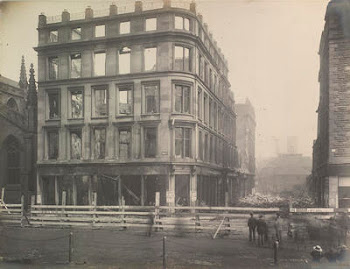 "The blaze began at about 10pm in the building on the north-east corner of Dunlop Street and Howard Street, which had apparently been lined with wood as it was built during a plasterers' strike. Within five minutes, the roof had fallen in.

"As crowds gathered to witness the spectacle, Captain William Paterson brought two steam fire engines from the Central Fire Station in College Street and called for four more from other divisions around the city.

"Three of these engines drew water from the River Clyde as the fire spread across Dunlop Street and engulfed buildings as far as Ropework Lane to the east."

Statuary was moved from nearby St Andrews Cathedral as flames threatened to spread west.
Posted by GLASGOW FIRE JOURNAL at 8:01 AM 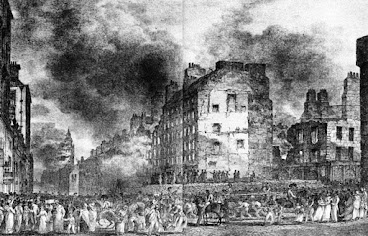 The Great Fire on Edinburgh erupted Nov. 15, 1824, and burned for five days. The disaster shortly after the city established a full-time fire brigade led by James Braidwood. An investigation exonerated Braidwood, according Wikipedia. He went on to lead London's fire service. 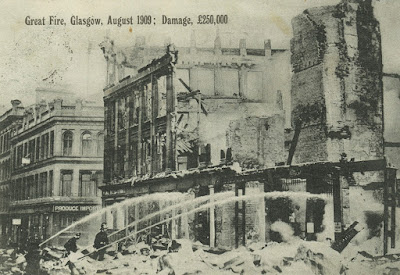 Glasgow's Great Fire of 1909 broke out on Aug. 17, apparently triggered by a gas explosion.

The conflagration destroyed buildings on Ingram Street, between Shuttle and High streets.

"Most of the buildings were warehouses thought to have contained wine, spirits, clothing and foodstuffs.

"The falling masonry narrowly missing several firemen, who had come to the scene from Central Fire Engine Station, just round the corner on College Street.

"It took all night to put the flames out and the cost of repairing the damage amounted to over £250,000."
Glasgow Firemaster William Waddell provided the following account of the blaze to Fire Engineering, an American magazine:


"The fire had a firm hold when the brigade arrived. Five steam engines, two motors, one fire escape and two hose and ladder carriages responded. Sixteen hydrants were available. They were spaced about 180-ft. apart; seven had (2 1/2-in) outlets and nine with 2-in. outlets. The pressure varied from 80 to 90 lbs.

"Both gravity and direct pressure is stated to have been used. The mains, of which there were three, were 4, 7 and 9 inch, respectively. Ten engine streams were also thrown, making a total of 26 streams played.

"The nozzles ranged length of 17,000 ft. was employed, and of this 12 tenths burst It is described as `canvas.' Nozzles described as `G. F. B.' pattern were used; they had both screw and bayonet fastenings. The water supply was stated as plentiful."

The London journal Fire and Water published a blistering commentary:

"Glasgow has provided one more example of the foolishness of crowding together buildings of large area, erected without regard to fire risk, and of permitting the storage within such buildings of highly inflammable goods, without any provision for preventing the spread of any fire breaking out upon the premises.

"As is generally the case in such disasters, everything favored the rapid advance of the fire which broke out in one of the Ingram street warehouses shortly after midnight of August 16.

"The buildings, without any claim to fire-prevention in construction, were —owing it is said to a strike of plasterers at the time of their erection—doubly lined with wood, the stock was large, and consisted mainly of provisions and soft goods of an inflammable character, which a spell of hot, dry weather had prepared for ready ignition.

"Had the fire been discovered in its early stage it would in all probability have been dealt with as effectively as had previous fires in the same block of buildings, but starting late at night at the rear of the building, it had obtained so firm a hold before it made its existence known that it would have required a far more powerful firefighting force than was available to have prevented the destruction of the block.

"The dangerous character of the buildings was recognised by the late Firemaster Paterson, who expressed the view that no brigade in the world could ever save them should they once get well alight.

"It was recognised, too, by the insurance companies in their rating of the risks.

"The fact that the block destroyed was situate within a few yards of Glasgow’s new central fire station has, perhaps naturally, caused some adverse comment, thought it is obviously unreasonable to suggest that in the absence of means of giving the brigade earlier notification of the fire the firemen could have accomplished more than they did.”
Posted by GLASGOW FIRE JOURNAL at 8:47 AM

The Scottish Fire and Rescue Service Heritage Trust is led by dedicated volunteers active in the restoration, conservation and preservation of vintage fire engines, firefighting equipment and uniforms.

Link to website
Posted by GLASGOW FIRE JOURNAL at 6:54 AM 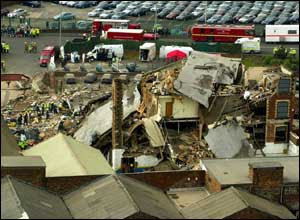 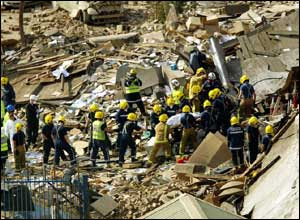 Thank you to Fire Journal reader John Brown for telling us about the May 11, 2004, explosion at the Stockline Plastics factory at Woodside, Glasgow. The accident claimed nine lives and injured about 40 others. The owner of the plant was cited for safety violations. Queen Elizabeth II commended the emergency services for their work.
Posted by GLASGOW FIRE JOURNAL at 11:37 AM 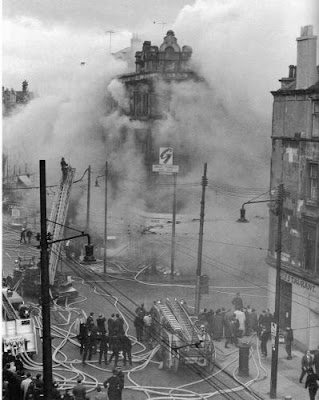 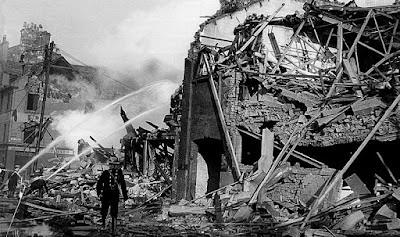 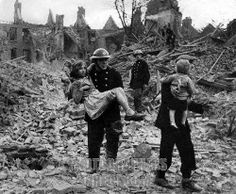 On the nights of March 13 and 14, 1941, German aircraft targeted the Scottish town of Clydebank and the surrounding area with bombs and incendiaries.

It was a prime destination for destruction - and the wartime fire and rescue services performed valiantly, battling the blazes and burrowing for victims.

Factories in the city, part of greater Glasgow, manufactured aircraft engines and munitions for World War Two. There were also shipyards.

Workers living in nearby tenements sustained terrible losses, with the attacks killing 528 people and injuring more than 600 others, according to the BBC.

On March 14, the previous night's fires ``were still blazing furiously, and the enemy, taking full advantage of the resultant illumination, carried out a further attack,'' according to an article entitled ``Clydside's  Ordeal By Fire'' by M. Chadwick.

''The seriousness of the situation can be gauged by the necessity to put into action over 200 pumps with the proportionate number of officers and men,'' according to the Chadwick article, posted on the website of Graeme Kirkwood.

Chadwick also told the story of fire brigade messenger boy Neil Leitch, age 16, who was repeatedly thrown from his bicycle on March 13, peddling to the Partick Fire Station to deliver his message:
``On one occasion, he was so badly injured that he was carried into a first aid dressing station. After the minimum amount of attention, he insisted upon proceeding with his message, contrary to the advice of the ambulance officers.
``He informed them that he must get this message through, as it was very important, and in spite of his injuries, continued on his way to Partick Fire Station. Just before he reached the Station, it was hit by a high explosive oil bomb and he received further injuries. Despite this, he heroically carried on and finally delivered the message.''
Tragically, Leitch succumbed to his injuries, Chadwick wrote.

He was gazetted by King George VI for his bravery and his nephew, James Leitch, went on to serve in the fire brigade, according to the BBC.

At a 2015 tribute to Leitch and others like him who died in the line of duty, senior fire officer George McGrandles of the Scottish Fire and Rescue Service said:

``The role of the boy messengers isn't widely known but it was absolutely vital. They took on an incredibly dangerous role to ensure fire crews could get to where they were needed even when bombs destroyed communications channels.''

James Leitch said:  "I grew up hearing about my uncle Neil ... These boys were forgotten. To me they deserve recognition.''
Posted by GLASGOW FIRE JOURNAL at 9:00 AM 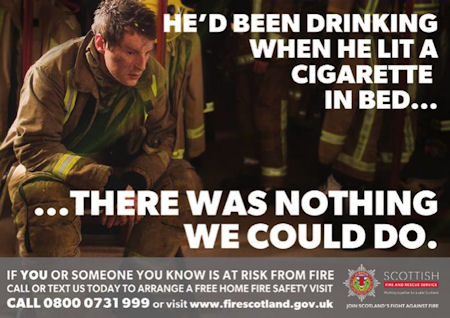 The Glasgow Fire Journal, a member of the Fire Journal Group of blogs, features fire and rescue history from across Scotland.

Written in the USA.

Written and edited by Vinny Del Giudice, a wire service reporter who spent 30 years covering Washington, D.C., started his career in journalism chasing fire engines in Springfield, Ohio, and served as a volunteer fireman and EMT in Arlington County, Virginia, from 1985-1992. (This is a hobby. Suggestions welcomed.)

I am a fire buff and one-time volunteer. This blog is an attempt to share what was learned from my time in the fire service and to thank my friends - volunteer and career alike - for their patience and support. There were many highs and many lows.